Andrew Dobson, an acoustical consultant at HGC Engineering recently presented a paper at The 15th North American Mine Ventilation Symposium in Blacksburg, Virginia. The paper, summarized here, presented a case study highlighting the unique directivity characteristics associated with a mine ventilation system and emphasized the importance of having directivity information provided by the manufacturers and suppliers.

In many jurisdictions, quantifying the sound emission levels of a mine is a regulatory requirement in situations where sound sensitive points of reception exist in the vicinity. This is achieved using a combination of in field sound power measurements, published sound level data from manufacturers, and acoustical modelling software to predict the sound levels in the far-field. Accordingly, a mine must either be designed to meet the applicable sound level limits prior to construction, or a noise abatement plan must be implemented to reduce the sound of an existing mine in situations where existing facilities do not meet the limits.

The ventilation systems used to circulate air through underground mines have the potential to be the greatest sources of environmental noise at mines. These fans tend to be high capacity axial or centrifugal fans, with direct exposure to the outdoors via the air intake or exhaust duct openings. The perceived audibility of this equipment can also be enhanced due to a pronounced tonal quality exhibited at the fan blade pass frequency.

“The potential for disturbance due to the relatively high sound levels of mine ventilation fans is significant. Thus, it is important to consider the acoustic properties of the equipment when predicting far-field sound levels during the design phase of the mine, or when installing new ventilation equipment.”

The potential for disturbance due to the relatively high sound levels of mine ventilation fans is significant. Thus, it is important to consider the acoustic properties of the equipment when predicting far-field sound levels during the design phase of the mine, or when installing new ventilation equipment. These properties include the source sound power levels and corresponding acoustic signature of the fans in the system, and the acoustic directivity pattern of the system resulting from the physical arrangement of the equipment. Sound power level refers to the total rate at which a sound source emits acoustic energy into the surrounding environment. As such, this is a fundamental acoustical quantity, (analogous to a kilowatt rating of a heat source) and it is independent of distance from the source, or the surroundings in which the source is placed. The acoustic directivity of a sound source represents the pattern in which the sound radiates from the acoustic center of the source. In essence, the directivity is a measure of the difference in radiation with direction and is usually stated as a function of angular position around the acoustic center of the source.  Sound sources which are not acoustically directive radiate sound in a uniform or spherical pattern. The directivity pattern of a source such as a mine ventilation system is a function of the physical design, including the associated duct dimensions, the type and position of the fans, the rate of airflow, the frequency spectrum or acoustic signature of the fans, and the presence of physical noise control measures, such as a silencer. Manufacturers and suppliers provide accurate fan sound power level data; however, the associated acoustic directivity data is generally not provided.

Standard acoustical engineering textbooks present methods for calculating acoustic directivity of exhaust ducts, which account for the hydraulic diameter of the duct, the center band frequency in octave bands, and the composition of the gas exhausting from the duct. Directivity indices were calculated using reference textbook methods, which consider the variables (i.e. dimensions, exhaust gas, etc.) applicable to the specific mine ventilation exhaust ducts considered. These values were then input into a predictive computer model, and applied to the source sound power levels of the ventilation equipment measured for the purpose of this study (recall that the sound power level of a source is independent of the acoustical directivity, whereby sound power dictates the “total sound level”, and directivity dictates the direction in which the acoustic energy propagates through the atmosphere). The model is based on the methods from ISO Standard 9613-2 which accounts for reduction in sound level with distance due to geometrical spreading, air absorption, ground attenuation and acoustical shielding by intervening structures. Figure 1, provides the predicted sound pressure levels and the sound propagation pattern associated with the textbook directivity factors. 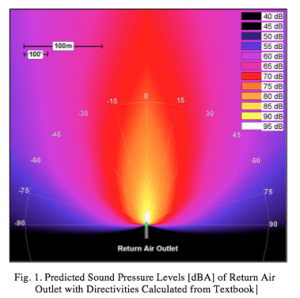 Regarding the directivity patterns exhibited in Figures 2 and 3, the majority of acoustic energy is concentrated between the on-axis and 45 degree directions, which is expected and broadly similar to the reference textbook predictions. However, significant dissimilarities are realized at the specific angular positions.

These results are significant in the context of a new mine project, or when installing new ventilation equipment where the sound emission levels are a concern and governmental regulations apply. If accurate directivity data is not incorporated during the preliminary acoustical modelling phase, prior to construction, the offsite sound levels may be underestimated in some locations, and overestimated in other locations, in the offsite areas of concern surrounding the facility. The consequences of this can be the unforeseen annoyance of neighboring residents, sound levels which exceed the regulatory limits, and the unnecessary need for retrofit/replacement ventilation equipment and/or noise control measures.

While the textbook directivity information does provide estimations that can be applicable in some situations, this data should be used with caution when predicting the sound levels of mine ventilation systems. In addition, while the measured directivity data outlined herein accurately represents the ventilation systems considered, these may not be applicable to other systems. Nevertheless, collecting additional data, by conducting acoustical measurements in the manner outlined above, could provide additional insight regarding mine ventilation directivity patterns, and the factors contributing to the variations thereof.

Therefore, it is prudent that the manufacturer’s and/or participants within the industry establish a method to accurately quantify the directivity pattern of a given system prior to the implementation at a mine site, to accompany the fan sound power levels, as this information is valuable in the context of assessing the sound levels of a mine.