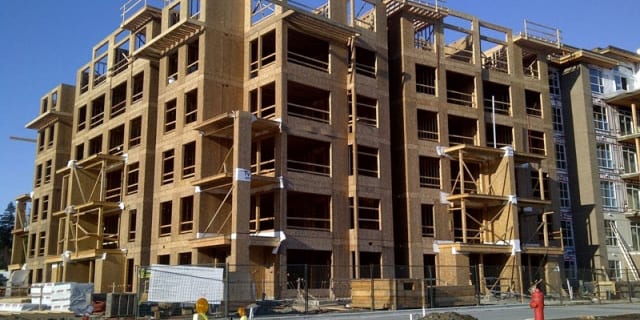 The sound insulation performance of demising partitions in buildings is commonly evaluated using a rating known as Sound Transmission Class (STC), which takes into account how much sound at a range of frequencies will be reduced on its way to the other side of the wall. The higher the STC rating, the higher the airborne sound insulation of the wall.

In wood-framed construction, the internal stud walls generally form a part of the load-bearing structure; consequently, plywood or OSB shear panels are often used within the stud walls in order to provide structural stiffness for the building to resist wind loads. Double-stud walls are commonly used, which in some configurations, requires a shear panel on each stud set, which builders prefer to locate on the inside of the sets of studs. The figure below shows three possible configurations; the wall section on the left (a), indicates a double-stud wall with no shear panel and one large cavity (air space), the centre wall (b), has one shear panel with two distinct cavities of different sizes (both filled with insulation), and the wall on the right (c), has two shear panels, forming a system with three cavities, one of which is quite small and is typically not insulated.

Sound Transmission Mechanisms Between Layers of the Assembly

There are two main mechanisms by which sound can transmit through the overall assembly: the first is a solid coupling between elements that are rigidly connected, and second is an airborne coupling due to panel and cavity resonance.

HGC Engineering has conducted field tests to measure the Apparent Sound Transmission Class (ASTC) of a three-cavity system at construction sites where the triple-cavity system was utilized, despite not being indicated in the design documents. In one case,  the potential for the reduction in performance was identified early in design, a mock-up was constructed to allow for testing. The tests of this configuration exhibited reduced performance in the low-frequency ranges, as expected, and achieved an average test result of ASTC-49, one point below the target.  Over the course of various sites, the individual results have varied above and below this.

The effect of fastening the drywall to the studs with resilient channels was explored, in order to reduce the degree of solid coupling between these elements. When tested in the field with the drywall on both sides fastened with resilient channels, an average increase of four points in the STC rating was observed (ASTC-53), and meeting target STC rating of 50 by a reasonable margin.

The figure below presents the Apparent transmission loss test results for the 3-cavity system, with and without resilient channels. The performance increase in the lower frequency bands is easily observed. A separate approach that was tested at the mock-up site was the effect of using deeper wooden studs (140 mm), with 125 mm thick insulation in both sets of studs, and no resilient channels. When tested, this single wall achieved a performance of about ASTC-48, revealing no performance increase from the 89 mm stud test. However, these walls were specified to include an extra layer of drywall on both sides of the sets of studs, which would be expected to provide an increase in the STC rating of the wall to an overall performance in excess of ASTC-50.  Follow-up testing was not available for this wall.

In conclusion, it is important that the demising wall designs in wood-frame construction avoid small uninsulated cavities, and that configurations of the layers of a multi-leaf wood framed assembly focus the layers on the outside, rather than internally. In cases where this is unavoidable, installing the outside layers on a resilient system can boost the performance and may be able to avoid the otherwise significantly decreased results.